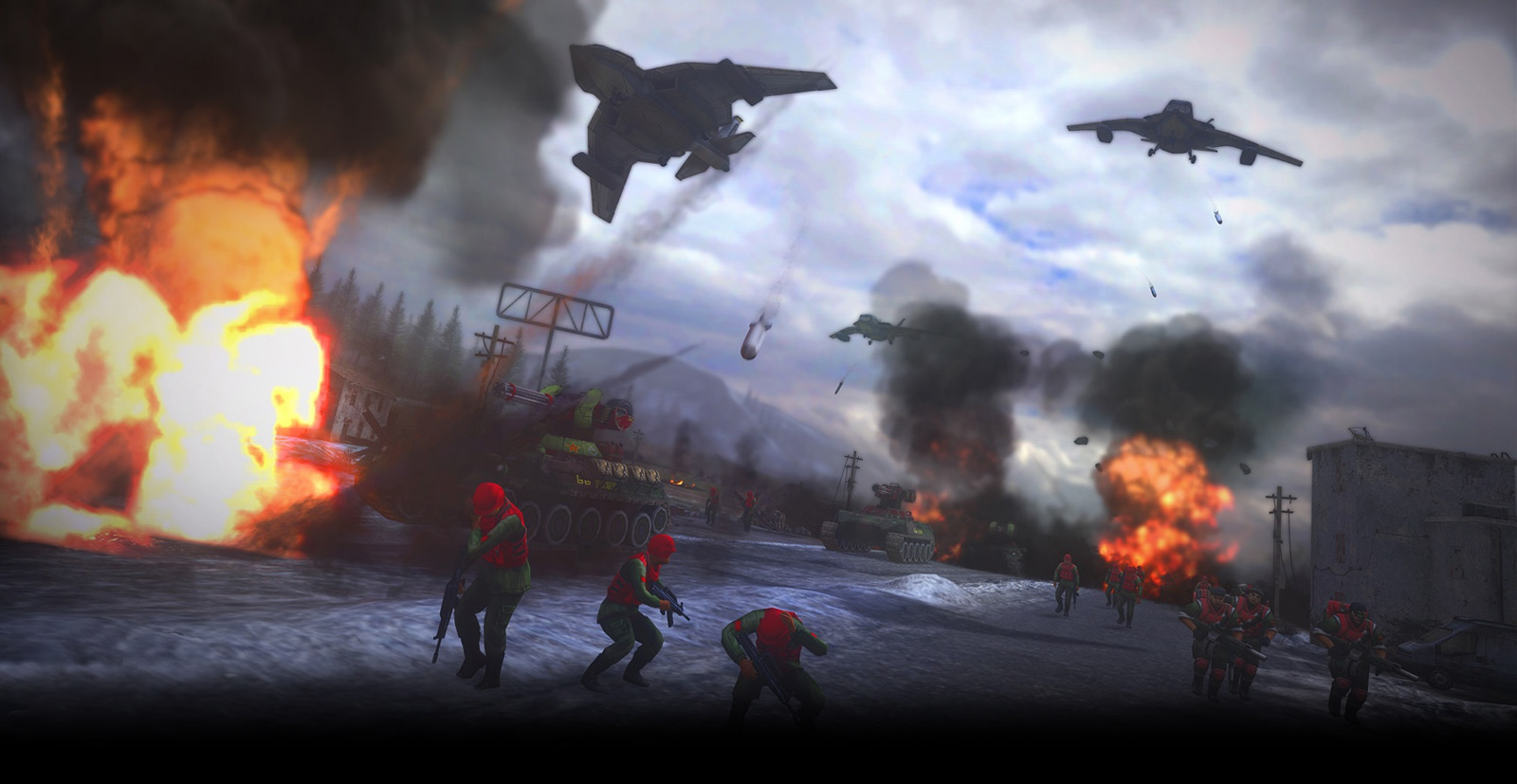 Hi I'm a big fan of your demolition work, and I was wondering if planting C4 is hard on the nails?
Charles

Charles,
I tell ya Charles, everything I do is hard on the nails, whether it's planting C4 on a moving vehicle, sniping at Yuri's genetic freaks, or swimming half a mile to blow up a Soviet Dreadnaught. My nails are the least of my worries though. I can't think about looking presentable when I'm worrying about taking out a fleet of Yuri's Boomers. Regards,

Johnny Boy!
So you're getting into the business, huh? I guess that means we'll meet again. Before you get delusions of grandeur about taking over the world, you might want to think about what happened to Romanov. Don't you know by now that I, and the rest of the Allies, won't let that happen? Every few years, some bozo thinks he has the master plan to take over the planet, whether it's through those aluminum-foil Tesla thingies the Soviets had, or the "psychic" gizmo Yuri uses. Puh-leeze. We make mince-meat out of all of 'em.
Love,

Dear Tanya,
I've been wondering, what exactly is it like when you go through the chronosphere? Does everything flash white and you're there, or is it like a weird, psychedelic tunnel or something to that effect? Also, since you obviously aren't looking for anyone, what with you being a big war heroine and all, is Lt. Eva available? The Outsider

Outsider,
The chronosphere is a trip! Of course, I have to be in a vehicle when I go through, so I don't really know what it looks like, but I get a great buzz when I beam. As for Eva's love life, I couldn't tell ya. Battlefield bunkers aren't the optimal place to discuss last night's hot date.
Love Ya,

Hello Tanya!
It is not often that so many ingredients of an elite fighting force appear within the body of one. Your military skill combines the force of a battle hardened marine with the stealth and swiftness of a navy seal. Needless to say , I am a great admirer of yours!!
Your choice of weapons have often interested me: you use your twin handguns to devastating effect against enemy infantry. What made you choose handguns in opposed to an assault rifle, or any other hand-held weapon? If you ever decided to change your career , what would you be? What would your advice be to those who have chosen you as their role model, both young and old?
It is always refreshing and inspiring to see how individuals the world over have proven that the key to victory lies in the hearts of the brave, and that gender is of no consequence whatsoever. Kindest Regards,
Jason

Awww, you're a sweetheart! With so many folks focused on "important" stuff like my hair and makeup, it's nice to hear praise for my military prowess. I gotta tell ya, the handguns have really worked well for me in the past. They're small and light and, unlike an assault rifle, are easily stowed when I have to start running for cover or suddenly dive into the closest river.
I honestly can't see myself changing careers any time soon. I'm way too dedicated to the Allies' cause and to stopping the psychic slug Yuri, to move into the private sector. I highly encourage all folks, young and old, to join the Allied fight. We're a noble bunch and have room for anyone who doesn't particularly like genetic mutants. Regards,

Dear Ms. Tanya,
Where did the Allies find you? Gun slinging, big-talking chicks with dual Colt .45s don't just fall out of the sky you know. Thanx loads,
Ian

And thank goodness for that! You know, back when we were taking out those slimy commies last year, I heard rumors of certain commanders building a whole army of me. Yikes! Anyhoo, the Allies didn't find me, I found them. I enlisted after hearing about the Soviets' devious plan to go back in time and alter history. I couldn't let that happen, could I? Love Ya,

Greetings,
I want to convey my respect to you for your incredible bravery and skill in facing the Soviet war machine. I am truly awed by your record of service in this horrific conflict of peoples and ideologies and minds. You are one of the unsung heroes of the shadows, one of the field operatives, and I would stake my life on your perseverance to the end. I am a tactician myself. As you must be aware, the entire world is watching, and sane people like yourself are already planning how to establish a central coordination apparatus for making certain nothing like this ever happens again. Suffice it to say that, in the future, unofficial and unseen methods must be used to stop those who would bring terror upon the innocent before they can even begin their actions, by precision small-unit strikes, even on an unprecedented international level. This is what we work on in Special Ops Group Echo. It is true that we were founded in Britain, but we have assistance from many nations who are helping to train and equip us -- even from Japan! And here is the key to the order of battle -- compartmentalized information. No one nation has access to even a tenth of the information that would be needed to identify us, much less locate us unless we provide means for doing so. And so I, who am serving as a key tactician in this new unit, have been tasked to try opening communications with you. Compartmented information works both ways, you see. We know as little about you as you know about us, and so we hope to learn more about your knowledge and skills, so that my command will be able to carry on the torch and deal with the crises of the future. If you do choose to exchange information in confidence, you who have my undying gratitude. But please note, since my command is not officially acknowledged to exist, we can only ask politely. There will be no pressure, and certainly no subpoenas. I have many questions, but I will await your decision on whether you would be willing to answer even one. Please extend my gratitude to your control officer for kindly providing the procedure to open comms via this dead drop. TOP SECRET WAYFARER
Lt. Colonel J. Garberson Shepherd, USMC
Commanding Officer, Special Operations Group Echo, §9.
Jason

ZZZZZZ.....huh? Oh, Sorry about that. Fell asleep somewhere around "horrific conflict." Sorry pal, I'm a soldier, not a tactician Regards,

Hi Tanya,
What do you do after a hard day at the battlefield? How do you like to relax? Any hobbies? Steve

Hey Steve,
Well, the Allied commanders work me pretty hard, but the little time I do get to myself is spent cleaning my guns, reading the latest copy of "Soldier of Fortune Magazine" and getting pedicures. Love,

Tanya,
How can you possibly swim in - 90 degree temperatures in the middle of the winter!? Are you in the Polar Bear Club or something? I'm surprised you haven't had hypothermia 200 times by now. Just tell me, how on earth do you do it? Your ever-lovin' Fan,
Post Office

Honestly, I don't even notice the water temperature. I chalk it up to the adrenaline rush I get when I'm sent out on the battlefield. When I'm after a Soviet Dreadnought or Yuri Boomer, all I can think about is how pretty the huge explosion will be.
SHAKE IT BABY!,

Tanya,
Just how many times has the NRA asked for you to join?
Also, how many gun and explosives magazines do you subscribe to?
Bruce

Brucester,
The NRA? Bah! No way am I going to spend my days with Charlton Heston when I could actually be doing something about gun-rights on the battlefield. As for the magazines, I subscribe to a few, but I rely more on the intelligence I get from our commanding officers about the latest technology.
XOXO,

Tanya,
How would you match up with Yuri in a fight? What weapons/techniques would you employ? It seems that you have greater resistance to his mental powers then the average human.
David

You're kidding right? I'd smoke him like a chimney. Personally, I rely on long-range weapons to take him out when he's not looking, and the Allies as a whole have some great new weapons like the Robot Tanks. Totally immune to Yuri's feeble attempts to mind-meld, they buzz right into a base and blammo! No more Yuri.
CYA,